A look at historic and current artists in the Canadian Rockies 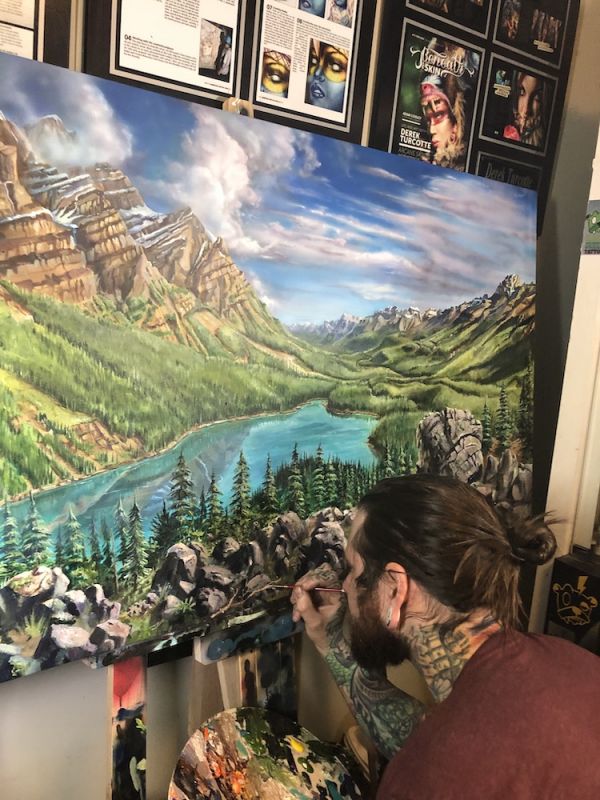 Nature meant us all to be Artists

For thousands of years, First Nations People beaded, danced and sang to the beat of nature. Leaving pictographs and petroglyphs; rock art for those to find in the future. It’s only in the last few hundred years, photographers came. In the beginning to record the mountains, create maps, and attempt to bring back and share what ultimately STAYS HERE.

We don’t know where exploration might lead us or the growth we will incur along the way, but what we do find is change and an abundance of imagination.

Banff’s first official tourist was Sir James Hector, a Scottish geologist, naturalist, and surgeon. In 1857, James Hector was employed with the Palliser expedition to survey and scrutinize the Canadian Rockies, documenting if these western mountains were worth anything? Is there potential for agriculture? Is there gold? As it turned out - There was neither! But perhaps what James uncovered was worth more than gold.

Sir Hector occupied his days scrambling alpine tarns. He sat high on the slopes of Cascade Mountain, of which he named, enjoying the wildlife and sketching the land. His eyes were torn from paper to alpine scene. The mountains, as he began to see them, were no longer an evil existence, no longer considered just a barrier. In those moments of scanning the surrounding peaks, the first westerner pronounced these mountains as beautiful.

One only has to watch the western anemone peak out, bloom and then flourish to find inspiration in nature.

In 1888, Cornelius Van Horne, manager of the Canadian Pacific Railway wanted to attract tourists to the Rockies, famously saying, “If we cannot export the scenery, we must import the tourists.” He invited artists from all around the world, offering them a free train ticket and a free stay at the newly opened Banff Springs Hotel, with the only condition being he could use and multiply any work they created during their stay. Mr. Van Horne knew that wherever there is beauty such as this, there is creativity. (And free advertising) I imagine an influx of artists would have found their way here eventually, but Cornelius discovered a route. Many of these artists stayed and captured the charm with photos, painting, sculptures and words.

One such woman was Mary Schaffer Warren, at first aiding botanical research in the Canadian Rockies with her talent of illustration. She moved from Pennsylvania to Banff, riding into hidden valleys and upon dazzling blue lakes which had never before been revealed to a non-aboriginal.

Like many prior and after, Mary was inspired by this land. She became a photographer, painter and ultimately left us literary record with her book, Old Indian Trails of the Canadian Rockies, published in 1911. This “rather silly little book” as she wrote to her friend, is in fact a great addition to Canadian Rocky Mountain history.

“Nature meant us all to be wild flowers instead of house plants.” Mary Schaffer Warren

Jocey Asnong, an author and artist whose mediums include chalk, pastel and mixed-media-collage came to Moraine Lake as a young adult and knew within her first few days amongst the surrounding ten peaks that she’d never look back. She felt like she was home. It’s hard for Jocey to define how living here changed her style. One way she put it was everything became an influence. She attempted to explain it as, “The life force - The shapes in the mountains, the colour of snow and brilliance of water. The skies.”

From flat land to this whole other planet of vertical sky lines. Everything is kind of out of proportion. “Many of my illustrations are out of scale and I find the mountains like that. They’re in my face. I feel a connection.” While living at Moraine Lake, Jocey created personalities for each of the peaks. She still goes there when she feels out of balance. “I then feel like I am surrounded by Mentors.” She told me and then laughed, “Mount Temple is such a show-off.”

Jocey is admittedly cautious by nature, and in her Nuptse and Lhotse Children’s book series about two adventurous cats, she created a character similar to her own. Her art and stories encourage young children, and us adults reading to them, to open our eyes wider, planting the seed within us that even if we believe we’re not brave, adventurous, or sporty, we can still have adventures. She wants kids to be curious about the world. Sometimes, when Jocey is feeling stuck, it’s this curiosity to get out and go for a walk that inspires her creativity. 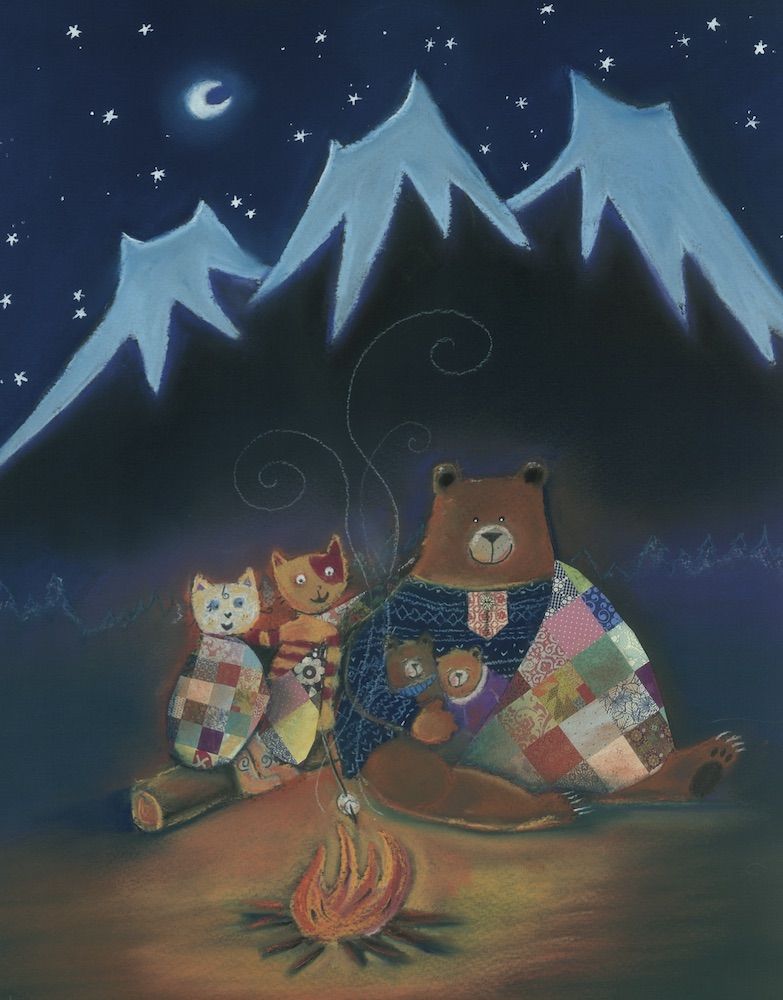 Jeweller Savannah, also loves going for a walk. She likes to look at flora and identify the medicinal property of plants. With a Bachelor of Science and Ecology, Savannah did her honour thesis in Kananaskis, Alberta, and said,

“Spending so much time outside, one can see micro changes every season.”

By trying to capture these changes, she translates into another medium, striving to embody that same feeling as when she’s out there. The art Savannah creates with jewellery and moccasins intertwines the land and culture. Savannah’s mom is Cree Metis and they learned how to bead-work together. Every single bead is hand sewn, often taking six hours for a pair of earrings. By using traditionally died and smoked leather, porcupine quills and locally sourced beads, Savannah has shaped a circular community which brings her and her art a connection to the land and a bridge to the past.

She admits that it’s really flowers and plants that inspire her and also said, “From science to my grandparents, being in the wilderness marries these two worlds for me.”

Land is a part of this artistic culture.

Land shapes traditions and expressions. Bradley Bischoff, singer songwriter, and member The Wardens Band, shares his expression with a goal to take all of us on a journey from mountain top to valley bottom. He said, “I’ll scan the audience, searching for that person who taps their toes, sways, or wraps their arm around a lover. Absolutely immersed in the moment what we are doing.”

When I spoke with Bradley, he was beside the Bow River with the tall grass waving, smoky valley and no traffic. “It clears the mind,” he said, “When I was a park warden, I’d spend weeks in the backcountry, cleaning the slate of everything that’s a burden. Wide open spaces allow us to explore. It facilitates the pen.”

A place where the mind is free and spirit is vibrant, Bradley has managed to bring all this feeling into his music. 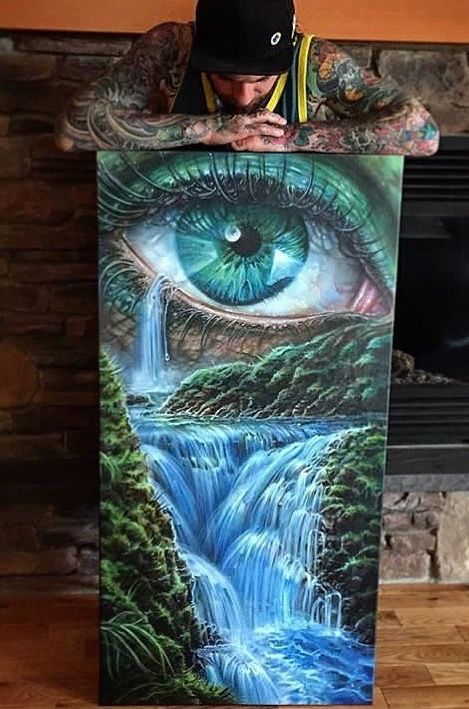 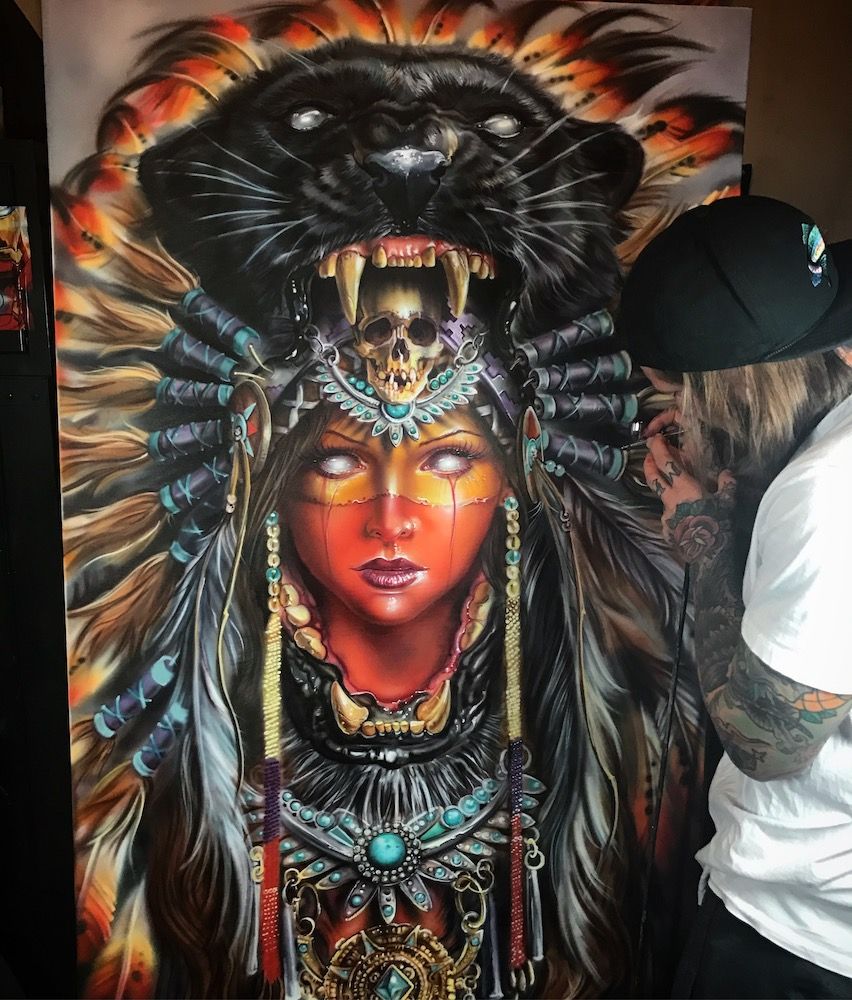 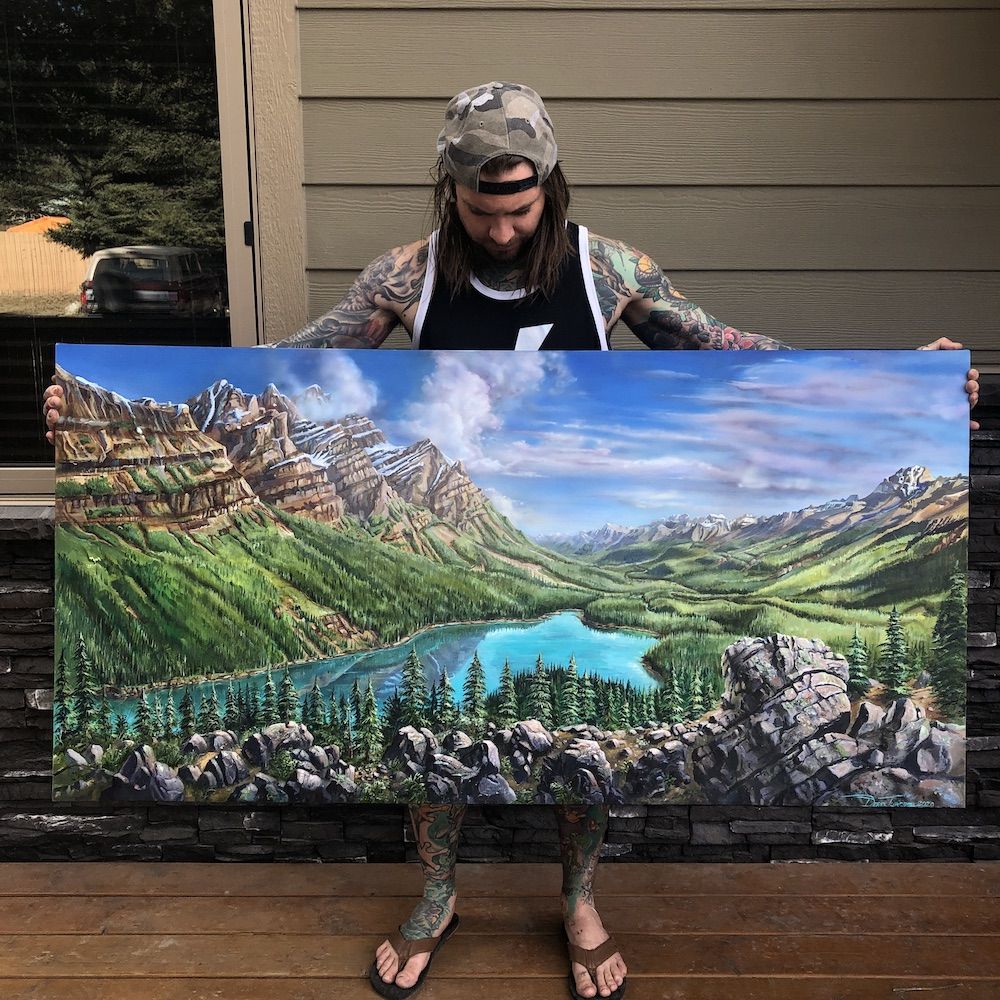 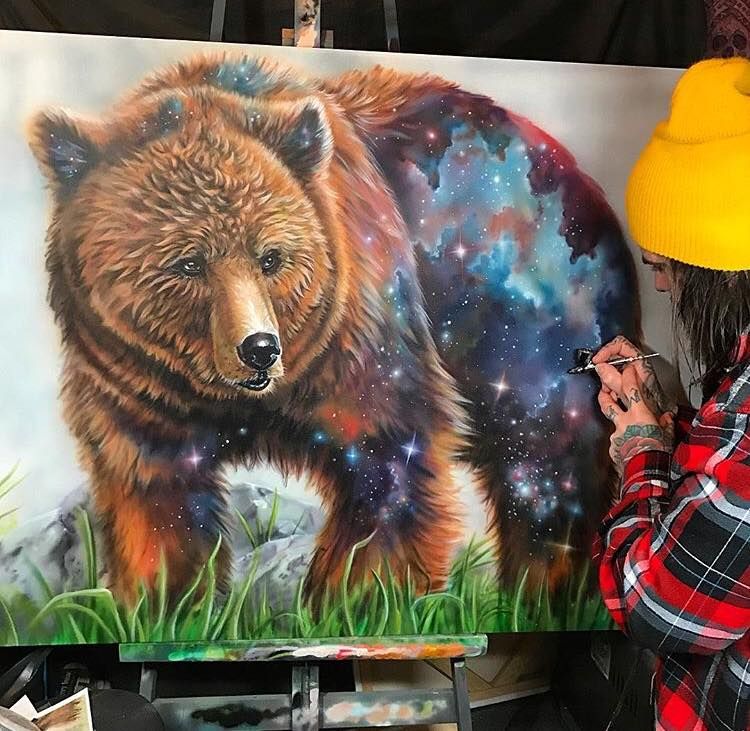 Derek Turcotte, owner of Electric Grizzly Tattoo in Canmore, translates the influence of the land, nature and animals into incredibly detailed paintings and tattoos. I tried to explain to him what it felt to look into the eyes of his animal creations. After I fumbled with the words, he laughed and said, “Some call it the window of the soul.”

Turcotte likes the vibe in the mountains. “It’s where I feel most connected with people. I just want to learn new stuff and to try and learn that better. It keeps life interesting.” He explained how as an artist, you are searching for that something that inspires you.

There is something that feels so rugged and wild in the rockies that many of us appreciate, including photographer Jeff Bartlett. He explained how the bucket list for photographers to shoot in the Rockies might be ten places, but the more he explores by foot and bike, the more he finds endless motivation and the bucket list expands. Jeff’s photos continue to capture what we all want out of the wilderness; that feeling of being free, pure and clear. Jeff leads Big Nature's Photography Programs, constantly expanding how much we can experience with the camera and story.

The energy in the Canadian Rockies inspires all these forms of creativity. Prior to us having written history, art took place here. Art is fundamental. It’s not an extra.

Whether the expression is writing, photography, painting, pottery, tattooes, dance or music; at the core route, it resonates. AND it’s full of impact. One more thing is for certain. This place is our Muse. 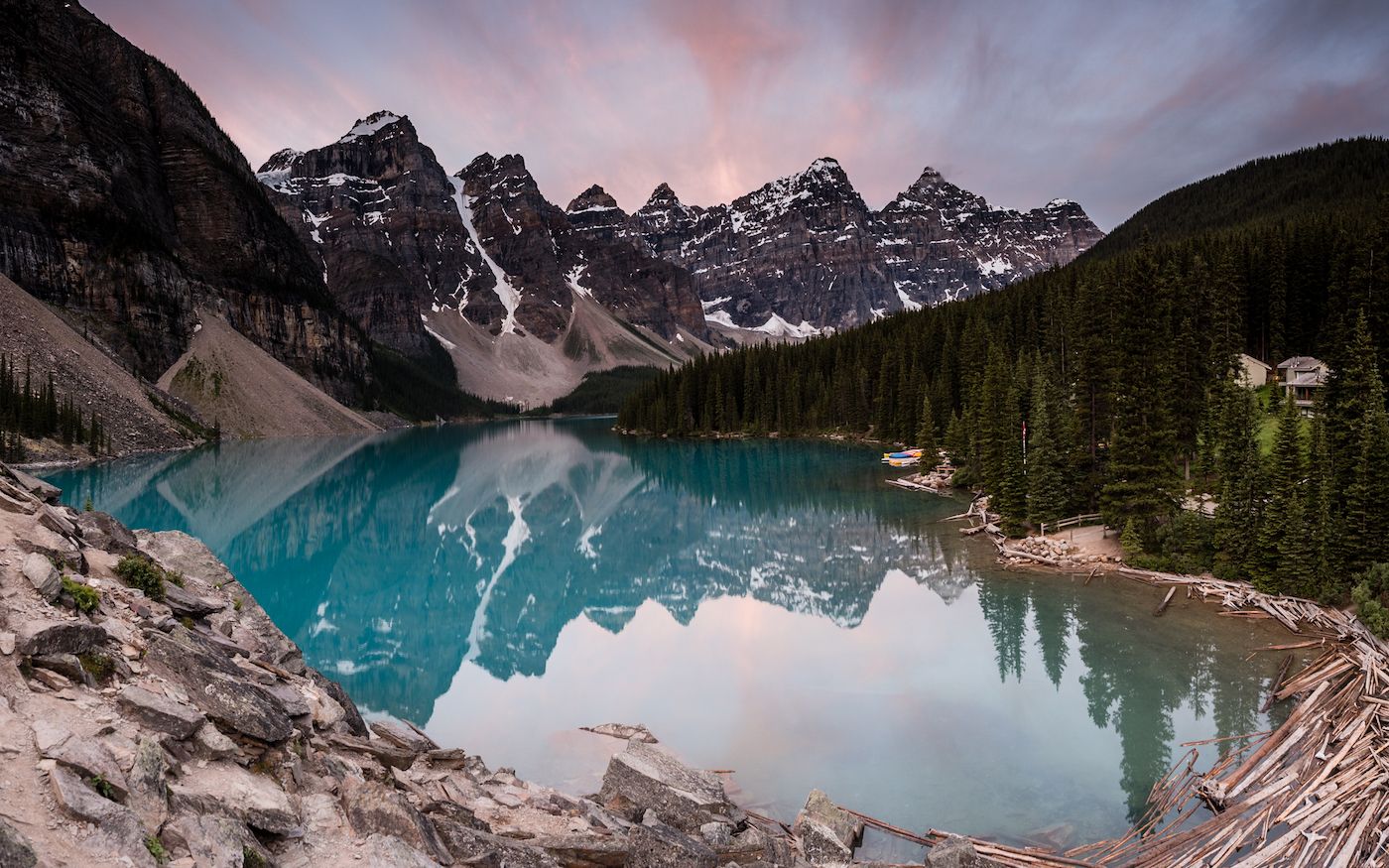 And it can be yours too. Are you searching for inspiration in the rockies? Book With Us

* Big Nature Guides are Awesome! But we learn from other incredible guides AND guides sometimes embellish. I know! Crazy Right?! They don't lie, but maybe they stretched the truth. We try to get it right, but really - A free stay at the Banff Springs Hotel??? - Actually, that seems like the truth to me. Want to find out? Call us

Check out Our Newsletter: 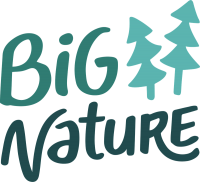 Go Local with our Canadian Rockies Company and Guides